For my first gravel event, I don’t think it could have gone better! I was nervous, for sure, because I only just got my gravel rig — a 2018 Specialized Sequoia — last October. And it’s one thing to ride gravel on a fatbike with beefy 4+ inch tires and quite another to “unlearn pavement” on a drop bar steel frame with 42 millimeter/1.6 inch tires.

Sunday was the sixth year for Mark Johnson’s 80-something mile Grumpy Grind gravel race out of Milledgeville, Il. Each year is a different course, unveiled the morning of the ride when participants are handed their cue sheets. Mark was clear in warning riders it was unsupported with just water and some snacks available at the midway checkpoint, adding riders needed to finish the 86 mile course by 4 pm.

I loved the idea of this challenge and despite my longest gravel ride having been a recent solo 100k, I was anxious to see if I could handle it, but honestly doubtful I’d make the cutoff time.

I knew several friends of the bike shop doing it, but I’d decided I was riding this by myself and didn’t let myself plan for “what ifs” and use my friends as “fall backs” in the event my ride went off the rails. I had no Plan B. If we rode the same pace? Awesome! If not, I was not going to slow down or push my pace to stay with anyone. I intended to do my thing, plan accordingly and hope for the best.

Between energy gels, waffles, protein & candy bars, I packed enough nutrition to share and had 3 water bottles mounted on the bike with powdered Roctane, Tailwind and Skratch for each. My tires are setup tubeless, but I had 2 tubes and CO2 cartridges in the event of burps or flats. Empty gel packs could serve as patches if a tire got a gash. Any mechanical failure? I’d be fubar’ed.

At 8:45am the fellas rolled toward the start area, lining up toward the front. “How optimistic,” I joked. After a few words from Mark, me and 90 other riders took off. I tried to stay loose and watch the wheel ahead and the riders around me. Joe took off quickly, as expected. He’s a seasoned gravel rider, great cyclist and finisher of several Grumpy Grinds. Zoran and Mark were near me, but I sensed they were soon off on their own so I ended up falling in with strangers.

It wasn’t my intention to be in a paceline, and I was too scared to take my eyes off the wheel in front of me to turn around and look back, but as the course steered us east into headwinds, it was nice to have bikes and bodies blocking that wind. To quote a member of our shop’s Thursday night gravel rides, “Riding in that draft is soo easy…”

About 14 miles into the ride, I found Zoran and Mark on the side of the road having snacks so the three of us hung together for the next 25ish miles. Eventually the guys fell back while I stuck to my pace and forged on alone. I wasn’t riding super hard, but I felt strong and wanted to see how long I could maintain it before buckling. But going solo meant I’d have to start following the cue sheet. Except for one near miss, I managed each turn though my system of stuffing/pulling the cue sheet from my handlebar bag for each turn sucked.

Rolling into the check-in, I gave my name, unloaded my garbage, dumped my powder-filled baggies into empty bottles, refilled them with water and took off as Zoran and Mark pulled in. The remainder of the ride was just plain awesome. Because I log the majority of my miles alone, I wasn’t bothered being the only person out there. I blew by a couple guys and was passed by a few as well, but for most of the second half, the road lay gorgeously empty both ahead and behind me.

The one challenge was a four-mile segment straight east into the wind. With no draft to ease the pain, I put my chin down and tried to pedal easy. My right quad started cramping so I took some salt, a few fingers on my left hand went numb, my lower back ached, my neck tightened with knots and I had to keep reminding myself to lower my shoulders. But there was NOWHERE else I’d rather be. These aches were minor. The pain? Frivolous! I was damn lucky to have the health and fitness sufficient to grind it out. Even during those four ugly miles, it was a privilege to be on my bike!

As soon as that segment ended, like a horse sniffing the barn, I shifted into the big ring and sped off toward a finish that was just an hour or so away. And speaking of horse, around Mile 82, just as I was approaching a bridge, three big, beautiful horses were running free . . . straight at me! I did all I could to pull over and get a picture.

Just as the horses three disappeared, so did the gravel end, pavement begin and the bumpy finish through the field greet me. It was over! I’d made the 4pm cutoff with a few minutes to spare and finished in 31st place! Joe greeted me, having finished an hour earlier, and Zoran and Mark rolled in just 10 minutes later. A fourth friend, Seth, came in a few minutes after Z and M, but with an extra 10 miles due to a missed turn. 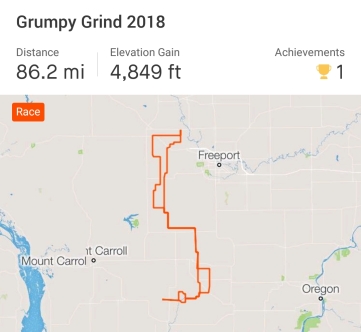