It was a moment of weakness when I registered for the Las Vegas Rock & Roll Marathon last spring. Friends were signing up & the early-bird registration was quite affordable at $125. So with thoughtless fingers, I completed my online registration.

I had no business doing so, for several reasons: A) I did a Rock & Roll half marathon in Chicago in 2010 and given the high price tag, it should’ve been fabulous. It wasn’t. Neither awful nor awesome, the “meh” attitude with which I was left me caused me to swear off future Rock & Roll events. 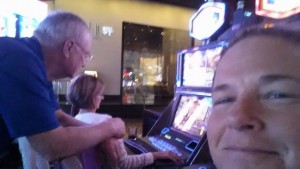 My second mistake was forgetting I’ve never had a desire to visit Sin City, ever. It’s hot, it’s crowded, I don’t drink, I try not to smoke and I don’t gamble.

Then I figured it could be a short getaway for my husband and I . . . until Marty was lured to Florida for a week of golf with his brother-in-law. Then, as the event grew nearer, the friend I planned to travel with opted to drop out.

When I told my mom about the event and my predicament, she said her and Dad wouldn’t mind going back to Las Vegas since their last visit had been 25 years ago.

So I booked a package deal through Allegiant Air for the three of us. Flying out of Moline Friday afternoon and returning Monday, we had rooms at The Mirage and complimentary tickets to the Cirque du Soleil Beatles LOVE show for Friday night.

Because I’d never expected to visit Vegas, I was ignorant of its geography and really only knew it sat in the desert. I didn’t realize it was surrounded by the attractive red rock of the Sierra Nevada Mountains.

Sitting sandwiched like an eight-year-old between her parents, our flight out was cramped, noisy, but incredibly smooth. (Our return was opposite in every way: I’d selected seats with extra leg room, the 7 a.m. departure was quiet, but both the take-off and landing were a bit bumpy.)

Arriving in Las Vegas mid-afternoon we were able to check-in to our hotel, collect our tickets for the 9:30 show that evening and visit the race expo for my bib number and swag all before supper.

Having left Dad back at the hotel, Mom and I tackled the expo by ourselves. Try as I might to avoid having my picture taken, Mother insisted I stand before an expo sign. Ugh. But as fate would have it, while Mom attempted to take said picture, some people began walking in front of me. Turned out these random strangers were friends from the Cedar Rapids/North Liberty area who I didn’t know would be there! It was estimated 40,000 runners participated in the Saturday and Sunday events and there I stood with a gaggle of buddies as if we were at some local Iowa race!

Mom marveled at the size of the packet pickup and number of vendors. While I normally loathe expos because of the crowds, seeing Mom sample nibbles of mint chocolate chip PowerBars and snatch up free samples of organic Hemp Pro protein powder, it was totally worth it.

Plus, we both got suckered into purchasing hand lotion. As the vendor massaged the aloe cream into Mom’s hands, she said the magic words, “It won’t wash off, no matter how many times you wash your hands.” Mom, being a nurse, immediately said, “We’ll take two.”

Following the expo, we grabbed Dad and enjoyed a massive buffet at the hotel. If I was still drinking, it would’ve been a steal at $35 a head because all-you-can-drink wine and beer was included. That said, I attempted to eat my weight in sushi, shrimp and chocolate . . . not the best move considering how tired we were feeling and still had the Beatles show to see at 9:30 (11:30 our time).

But what a show!!! I had absolutely no idea the sensory overload we were in for. Premiering back in 2006, much of the music featured came from the Beatles psychedelic album, “Sgt. Pepper’s Lonely Hearts Club Band.” The songs and voice overs of John, Paul, George and Ringo were acted out with the acrobatic prowess of the famed Cirque du Soleil troupe.

Done “in the round” with the audience circling the stage, our nose bleed seats from above gave us a bird’s eye view of EVERYTHING! Whether it was trapeze artists swinging from a ceiling dripping with twinkling lights to the sound of “Lucy in the Sky with Diamonds” or bubbling, billowing fabric slithering from a rising bed and covering the audience 20 rows deep during “Within You Without You,” the three of us agreed you simply didn’t know where to look!

From all directions came colors and movement and sounds. No wonder the people sitting next me had seen the show seven times! Every song was a different scene offering weird, eye-popping, candy-colored costumes. We were riveted by the roller skaters zipping and flipping over half-pipe skate ramps to the song, “Help!” and transfixed by the floating jelly fishes bobbing from their bungee cords during “Octopus’s Garden.”

I could go on, but no words, no photos will ever do this 90-minute show justice! That, alone, made the trip worth it.

Tune in next week for two vastly different tours of the Las Vegas Strip!

Originally published 22 November 2014 in The Observer.