Last weekend, that smell?! *sniff, sniff* Did you catch a whiff? That hint of “spring” in the air?! Call me optimistic (or delusional), but I swear I detected the coming of tulips and robins on the wind.

Don’t get me wrong, I love all four seasons, but from a running perspective a little warm-up goes a long way! Especially given the double-header of events of last weekend.

Starting with Saturday’s 33rd running of the Frostbite Footrace along the hilly roadways of Scott County Park.

What used to be a five mile event was pared down to a 5k a few years ago. At the time, I was pretty bummed as it was just a handful of local events that were longer than a 5k. I’d asked race director Marianne Schroeder why the change and her reasons were simple: numbers.

Not only does it take fewer volunteers to coordinate a shorter race, but shorter distances open themselves up to more people willing to challenge themselves. I get it! Five miles sounds daunting, but a wee over three? Whether walking or running (or a little of both), 3.1 miles are doable!

And it was VERY doable last Saturday! The race started at 1 pm, perfect timing for temperatures to reach a gorgeous 42 degrees.

The Frostbite saw over 200 participants toe the start line including local runner Ashely Spain of DeWitt who smashed one of her 2015 goals—running a sub-25 minute 5k! Ashley and I messaged back and forth in the days prior to the race.

As a member of the Facebook group “DeWitt Running Club,” Ashley’s training paid off with a time of 24:46 to snag top honors in the women’s 30-34 age group! (Second place was more than a minute and a half behind her!) Taking the overall 65th spot from a field of 242, Ashley broke the tape on the heels of Quad Cities Cornbelt Running Club president Paul Schmidt (that’s some impressive company she’s keeping)!

Myself? I finished. Having run the Frostbite several times, it was a treat not to have to slog through slush, squint into blowing, snowy headwinds or lose feeling in my toes and fingers. It was a fun day of r 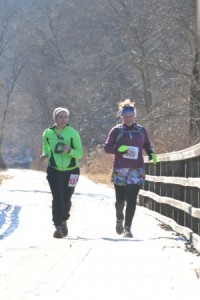 unning in which I high-fived some volunteers and chatted with many friends out enjoying Scott County Park’s hills. I am seldom a contender and was surprisingly pleased that my turtle-ish 31:48 placed me in the top half of my 40-44 age group.

While I tried to challenge myself, in the back of my mind, I knew I had to conserve a bit of energy for the following day’s half marathon along Dubuque’s Heritage Trail for my third visit to the Triple D Winter Race & Poker Run.

As described by race director Lance Andre, “The Triple D is a winter endurance trail event that traverses Dubuque County, Iowa, in the dead of winter by bike, ski or foot.”

Participants choose their poison with runners and cross-country skiers taking on the half marathon, marathon or 50k ultra marathon distances. Bikers have just one option: a plus-100k/67 mile spin.

The terrain is not the challenge and it certainly isn’t an event that most people “race” because of the weather, typically Dubuque’s average temperature is 24 degrees and most participants are merely seeking a finish.

In 2015 and 2014, however, the relatively warm temps have been a welcome reprieve from my first Triple D in 2013 when I ran the full marathon on a day so cold my braids froze like Pippy Longstocking and my Camelbak crunched with ice.

But the nightmare that was 2013 continues to fade, replaced by last year’s and this year’s comparatively balmish, sunny events that left many of us stripping off layers as we ticked off the miles.

I usually enjoy seeing a host of friends at the Triple D and this year was no different! There were buddies from the Quad Cities, my relay captain from Clinton, Paul Wiederholt, and fellow Skeff Race Board Member Bill Petsche of DeWitt.

Paul, ever the maniac, ran the marathon as a “recovery” run having raced a 50k ultra in Arizona the week before. I, my QC pals and Bill proved much saner by doing “just” the half marathon.

In the week prior, the emails were flying among friends about the trail conditions. As temperatures began to climb, many of us worried the trail would turn to soup. Those of us running the half were very lucky as the limestone surface remained firm until the last couple of miles.

But the bikers as well as the marathoners and ultra runners had a different story to tell. As the cloudless sky lead to the day’s high temperature of 40, the sun beat the trail into, as Paul would later describe, “an interesting mix of frozen, slushy, soupy (and) some parts more peanut butter-ish.”

Bill, I and the rest of the half’ers finished long before the trails deteriorated to that point, and while our calves and shoes were certainly mud-caked, nothing could compare to the Facebook photos of the bikers, who were encrusted in a tan casing of goop from front to back, head to toe. All of them, I must add, grinning hugely.

It looked so gross and fun that I may just have to consider the bike option next year! Kudos to everyone for getting their “grrrr” on last weekend! Keep up the good work!!!

Originally published 24 January 2015 in The Observer.