I’ve seldom met a hair-brained idea I didn’t like. Most of them I let slide, but every now and again you just need to yell a hearty, “Why not?!” This was how my daughter and I ended up in Madison, Wisconsin, earlier this week.

It was totally impromptu and I blame it partly on the people I train with, and partly on lack of sleep due to Sunday night’s storm. The day was supposed to be fairly normal beginning with an early-morning training run. While storms usually lull me to sleep, the massive thunder and light show allowed me to see every hour until 3 when I messaged my running buddy and cancelled. 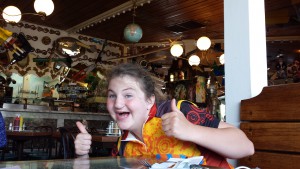 After a couple more hours of tossing and turning, I watched my husband ready and leave for a day trip to Ames. With our son departing later in the morning to join buddies for a few days at the Dells, I began weighing a thought that flickered to life a couple weeks ago: Madison.

Why? Because the area offers a great selection of triathlon shops and I’m actually beginning to enjoy this tri business. Though I refuse to purchase a tri bike and am certain I’ll NEVER want an aero helmet, I’m pretty excited about the regular swimming and biking that’s been added to my training.

I’ve been squeezing more open water swims into my schedule and though I’m comfortable in a one-piece swimsuit and Lava pants (capri pants made of buoyant Neoprene) I was recently reminded the water conditions of my next triathlon will be significantly different than the lakes and ponds of Clinton and Scott counties.

Later this month I’m doing the Racine half Ironman and the 1.2 mile swim will be in Lake Michigan. With a current water temperature hovering in the 60s, I need a full wetsuit.

Add to that, my bike could use a new seat.

Rousing Moira from her late-morning summer slumber, she was game for our 3-goal plan: wetsuit, saddle, bike ride.

A mere two hours later via highways 61 and 151, Moira patiently waited while the experienced folks at Madison’s Endurance House walked me through the specifics of owning & using a wetsuit. I settled on a sleeveless number to help alleviate my claustrophobia, not to mention the significant price difference between that of a full-sleeved number. 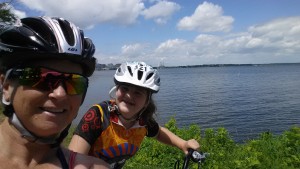 With the first of three goals accomplished, we searched out our hotel just as dark clouds were gathering. I’d hoped we might check out the Capitol area including Monona Terrace, but with thunder rumbling Moira talked me into a late-afternoon showing of the new Transformers movie “Age of Extinction.”

The movie was enjoyable enough, but the real entertainment was watching my skinny 14-year-old pack away chicken strips, mozzarella sticks and cotton candy. I’m quite sure this aided her buoyancy during our short pre-bedtime wade in the hotel pool.

Tuesday morning’s clear skies set the scene for our next goals and after clearing out of the hotel (and Moira feasting on THREE donuts from Lane’s Bakery in Madison’s Villager Mall) we began my search for a new saddle. Unfortunately, spur-of-the-moment road trips do not bode well for impromptu saddle fittings. We quickly learned reknowned tri shop Cronometro had a calendar requiring 10 days advance notice for scheduling a saddle fitting. The Trek Bicycle Store was about as helpful.

With the second goal a bust, admittedly both Moira and my sails were sagging. As we pondered our third and final goal: 20 miles of bicycle cruising, Moira argued for heading home. Then we spotted a vintage-looking ice cream shop and cut a deal, “Fifteen miles and then ice cream.”

Given Madison’s impressive labyrinth of bike trails, renting a bike was an easy alternative to lugging Moira’s heavy mountain bike from home. We chose to use the lake-side Machinery Row Bicycles where I secured Moira a Trek commuter bike for a base fee of $20 a day.

Within minutes (yes, it was that easy) we were off, pedaling along the shores of Lake Monona, past Olin Park which served as the starting point for last year’s Ragnar Relay Chicago and onto Waunona Way, through Paunack Park to the Yahara River at Squaw Bay.

As we cruised, we chatted. We noted the beautiful homes along the lake, the various smells of herbs, flowers and garbage cans wafting on the breeze, how she might want to try RAGBRAI “once I’m in college” and how her legs were indeed strong enough to make it over the next rise.

She reminisced about last summer’s vacation to Yellowstone and the anguish she felt during our bike ride along the George S. Mickelson Trail in the Black Hills of South Dakota.

Moira admitted this ride was much easier and more fun, but added she was tiring. Not wanting to tarnish this positive experience we turned back and logged exactly 12 miles, enough to stretch the legs, re-ignite her enjoyment for cycling and work up an appetite.

After a quick return of the rental bike, we headed to the promised ice cream of Ella’s Deli. When we initially drove past, it was the large carousel in front that caught our attention, but upon entering, neither Moira nor I could process the visual Laughy Taffy that stretched around us.

It was as if Walt Disney and Willy Wonka built a clubhouse! Equal parts “It’s A Small World” and Chocolate Factory with dashes of Tiki Room and Galena’s Kandy Kitchen, everywhere you looked there was something bright and fantastic whirling and moving.

Cable runways strung along walls and across the ceiling for all sorts of characters: Harry Potter swooping along on his Nimbus 2000; a mini Elvis Presley rocking his guitar; Bart Simpson skateboarding overhead. There were dancing peanuts, old timey propeller planes, candy striping and more!

As if the décor wasn’t trippy enough, the menu was a thick, multi-paged binder offering breakfast, lunch and dinner as well as the sweetest confections. We opted for a late lunch, Moira going with a blue slushy drink and fish and chips. I chose a pink, smoothie-like drink dressed with a pillow of cotton candy along with a cheddar and broccoli-smothered baked potato that came with tomato and rice soup.

Despite the long counter of various ice creams, we were too stuffed to indulge ourselves further. As we left Madison, I couldn’t help but question why we don’t visit more often? A mere two hours away, closer than Ames, Des Moines and Chicago, we’ll hopefully have another report, soon.

Originally published 5 July 2014 in The Observer.