And here I thought it was just my kids!

In talking with many parents, it’s clear that a lot of our 4Hers spend most of their year talking about projects and what they’re thinking about doing, but when it comes to the execution? It’s usually the two weeks prior to the county fair when the rubber meets the road and 4H Crunch Time hits.

Throughout the county, there were sanders sanding, photographers photographing, painters painting, bakers baking and knitters knitting. It doesn’t matter how detailed their plans, how pure their intentions, every year the ball-and-chain that is ‘procrastination’ bites many a 4Her in the keister.

Why? As has been our case for the last four years, I listen to their grandiose ideas for numerous 4H projects. These projects remain lofty ideals as Moira and Maclane try to convince us their “plans” are stored right upstairs, tapping their temples.

Those plans remain closeted safely in their minds until finally, usually sometime in late June, do those plans jostle loose after receiving a loud dose of motivation from their loving father.

It’s only after those pep yells talks begin are those dreams parsed from “what can I do to help myself learn and grow as a person” to “what can I get done in two weeks?”

To their credit, both Moira and Maclane had decided months ago what they wanted to do for their fair entries: Moira would refinish a dresser once owned by the late Joe Brown, and Maclane would create a new sign for the late Bruce Bielenberg’s Lake Loretta.

There’d been talk of photography exhibits, baking, gardening, maybe even a little knitting, but when 4H crunch time hit, they both chose to focus on one large project. Again, I have to give them props because they certainly didn’t gain this less-is-more mentality from their mother. I’m notorious for taking on more than I can handle . . . must be those sensible Murrell genes.

For this, I am grateful, because shouldering just the one project held within it many more meltdowns within the two-week 4H crunch time than I ever could have imagined. Literally spitting mad, Moira would burst through the backdoor, gagging and yelling. “Sanding is terrible! It keeps getting in my mouth!” (Maybe next year we’ll remember to dig out the dust masks?) 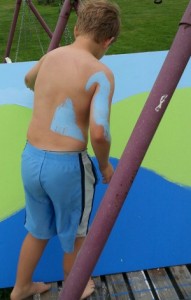 Then there was Maclane’s behemoth eight-foot-by-four-foot sign that required the same design be painted on both sides. He struggled with the design process and accepting that the little, happy trees in his mind are not easily translated onto canvas, er, plywood.

And just managing the size of the project, sent him spinning. More than once hot tears sprang loose when a strong wind would come up and blow the sign over. Admittedly, there were moments when I wanted to get in there and help him, but Marty and I agreed, they must do their own work.

In spite of the heavy angst each project caused the kids, they hung tough. Neither were easy, nor impossible . . . it’s weird how they each chose the perfect project for themselves.

That’s what is so impressive about the county Fair and touring the auditorium where each club displays the efforts of its members. The creativity, ingenuity and unique designs are inspiring! Every year, without fail, I end up strolling around with the same giant, weirdo smile on my face—we grow great kids here in Clinton County!

And though Moira and Maclane didn’t execute their projects for the accolades, it’s what they received! Each were practically floating on Monday when, during the judging process, they both learned their entries were considerations for the state fair.

I really hate to admit this, but selfishly I’d hoped they’d remain considerations. How could we possibly fit a visit to the state fair into an August schedule that’s already laden with a week-long vacation and the annual insanity that is our early school start?

And then there’s the potential heartbreak and havoc of having one child’s project make it to the state fair and the other not. Sure, we’d navigate those waters just as we’ve done every other crisis, but . . . fortunately for 2014, we don’t have to.

As luck would have it, we don’t have to find out: BOTH ARE GOING!

This is truly a fresh experience as neither Marty nor I had any project at the state fair. Though my nephew, Jacob Reemstma has shown livestock, this is virgin territory for our gang!

So I guess we squeeze a second trip into our tight August schedule. I think it’ll be worth it. While the state fair is a big deal, I believe the best part of this year’s 4H projects happened the day before our local Charlotte club show on July 11.

Moira walked up to Marty and asked, “So what furniture can I do for next year?” Do I dare hope she start that project sooner?

Originally published 19 July 2014 in The Observer.