Two weeks ago my 14-year-old daughter, Moira, had surgery. Not relating to anything life-threatening, no surgical response to a scary diagnosis, but surgery nonetheless. It was the third attempt to graft bone into her hard palate.

Having been born with a unilateral cleft lip and palate, Moira’s baby smile was extra wide and the inside of her mouth, a veritable canyon of openness. Aside from the expected eating issues, the cleft was merely cosmetic.

I prefer the term birth “mark” to birth “defect.” Well-meaning people would see her baby self and remark how lovely she’d look after surgery. I’d gently remind them, “she’s lovely now.” 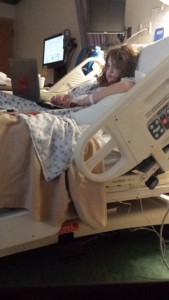 Her recent trip to the OR was one of many surgeries she’s undergone. At six months of age, University of Iowa doctors closed Moira’s lip. At 1-year, her palate. Then there were the holes (fistulas) that popped open in her palate, requiring skin grafts from her hip to close them. Like many other children, Moira also had a couple of sets of ear tubes put in, as well.

Then in 2nd grade, doctors made the first attempt at grafting bone from her left hip into her hard palate. The reasoning behind the graft was to allow Moira as natural a smile as possible. Often times, children born with cleft palates are missing teeth in the area where the face and skull didn’t fully come together. By grafting bone into the open palate, it allows doctors to either move teeth into the area or install implants.

Unfortunately, within the first couple of weeks after this first graft, tiny shards of bone began escaping and by the one-month post-op appointment, doctors confirmed our fear: the graft failed.

In 3rd grade, a second attempt was made. Once again, by the second week of post-op, she began handing us tiny shards of white bone. I felt sick.

Despite the emissions, the otolaryngology team believed some of the graft did take, which put Moira in a holding pattern, of sorts. No more surgeries until after braces.

Last spring the braces went on and after several months of moving teeth, we were informed x-rays showed there remained insufficient bone in the hard palate to continue moving teeth, that enough bone did not survive the 2nd graft five years earlier and she’d need a third.

I felt that old flutter of panic rise in my chest. I wanted to scream and holler that my daughter had to go through this, again and AGAIN! It wasn’t fair. And then the panic passed . . . even Moira would admit she’s got a pretty great life. Her “problems” are cosmetic. She’s a healthy, happy, normal kid!

Not only did Moira’s attitude help fend off the demons of dread, but the doctors working on her were a new team. Rather than go through the otolaryngology department at the University of Iowa, her orthodontist referred her to UI’s dental department where he teaches weekly and is “hands-on” with her team there.

After meeting with this team, I felt a little less scared. Their approach was more aggressive noting Moira would be placed on an antibiotic immediately after surgery, the bone would be harvested from the opposite hip, or as they put it, “a fresh site,” and then warned, “you’ll be coming out here a lot” because of Moira’s history with rejection.

An aggressive approach was music to our ears. I didn’t care if we had to drive daily or stay in a hotel, I loved the idea of these doctors keeping a close eye on her.

There were a host of other issues, minor in comparison, but pressing nonetheless. For instance, Moira plays trumpet, would she be able to continue? How limited would her other activities be?

Her team assured us that after 4-6 weeks of recovery, Moira could likely resume her normal activities. Timing proved key. To minimize any chance of being jostled, bumped or hit, we scheduled surgery as close as possible to the last day of school. May 15 was the best they could. We opted to keep her home for the remaining 10 days of the school calendar, working with her teachers to help her focus on homework and such.

By being at the end of the school year, she would have the summer to recover and be ready to resume her trumpet in August.

Many people have asked how Moira was handling the idea of surgery, “was she nervous?” Undoubtedly, yes, but Moira has two things going for her A) it had been several years since her last surgery so her recall wasn’t as fresh, and B) she’s a little Buddhist! If ever there was a child who lives in the moment, it’s Moira.

But as surgery grew closer, as she attended the pre-op appointment and talked with teachers and friends about the upcoming knife, she admitted her fears. Those fears? Not being able to eat Mike & Ike candy or popcorn. (Oh, the teen mind…)

The day of surgery came with several delays, but eventually she was taken into the OR. When she came out, it was with fabulous news!

Tune in next week to learn what happened and of the amazing things people did to honor Moira (and her fellow human beings)!!!

Originally published 31 May 2014 in The Observer.