I tend not to pay attention to luck as I’ve resigned myself to having very little of it. That’s not to say I’m a pessimist, I’m just not the one to win playing scratch tickets and my number is rarely drawn for a prize.

However, I’ve got a pretty great life, but luck has very little to do with it. For me, I think it’s more about simply doing the best I can and trusting that things will work out. And they always do . . . just usually not according to my plan or timeline.

Take my string of bad luck last week. It was a classic case of “if it could go wrong, it did.” 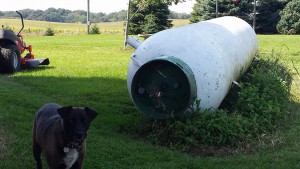 It started on Thursday afternoon. I was in Milan for an appointment when I received a call from the school, my son was laid up in the nurse’s office with back pain. He woke that morning complaining his lower back hurt so I gave him some ibuprofen and sent him on his way.

Maclane is rarely one to cry wolf so I cancelled the appointment and headed back home. While in route, I contacted our chiropractor in Clinton who told me to bring him in.

When I got to Northeast to fetch Maclane, the boy was in tears. Unfortunately, once we got to the chiro, he said Maclane’s muscles were too locked up to be adjusted and suggested we visit our doctor and have him x-rayed, though Maclane could remember no trauma.

I opted to try one more thing before heading to the doctor, my soft tissue therapist in Davenport who has also treated both kids for posture and muscle issues.

I started seeing this guy a year ago and his ability to find the problem, workout the pain then identify exercises to strengthen the affected area is AMAZING. Luckily, he was able to see Maclane yet that night.

Back to the Quad Cities we went and after a number of strength tests, the therapist opted to do a cupping on Maclane’s back which involved placing 12 plastic vacuum cups over his lower back. Leaving them in place for 10 minutes, the therapist explained the technique creates negative pressure on the skin’s surface allowing the soft tissue underneath to release.

Within seconds Maclane started joking and giggling about how weird it felt. The boy was getting relief! After removing the cups, the therapist covered Maclane’s lower back with an analgiesic then kinesiology tape, assigned him some exercises and scheduled him for a follow-up.

Maclane practically danced out of the office and to the car only to have another monkey wrench thrown at us: my car wouldn’t start. Two hours later, with an auto service looking it over and Marty waiting in the wings to rescue us, the service guy reprogrammed my key fob and brought the car back to life. Whew!

But the next morning my car barely started so we took it directly to DeWitt’s Bauer Repair. Eventually we’d learn it was a battery issue—that as a battery weakens, it shuts off service to various systems. I’m just grateful it was such a simple fix.

But the luck issue was far from over.

Last Friday, if you’ll remember, was a gorgeous day, and since I had no transportation, it was perfect for catching up on laundry and mowing the lawn. My plan was to quickly mow around the clothes line and lp tank which was nearby, hang a couple of loads of on the line and then proceed with mowing.

Our 1,000 gallon lp tank had been listing terribly and literally mere moments before jumping on the mower, I’d been looking at it, its left side sinking into the ground, knowing it needed to be moved.

As I was mowing around it, the back tire of the lawn mower may have made contact with the tank. If it did, it was a light nudge, hardly a push, in fact, it was likely the wind, but whatever it was, as I drove my new mower away from it, I caught movement out of the corner of my eye. The tank was rolling after me.

It sounds horrible, but it only rolled forward a foot or two, the line didn’t disconnect and all was well. (My lack of luck? Maybe I’m luckier than I thought because several people said it could’ve easily resulted in an explosion. Yikes!)

As it turned out, Eastern Iowa Propane was able to move it to a different spot and all is well.

Except one final “grrr” happened before my bad luck streak would be complete.

While a writer really only needs pen and paper, in today’s world, computers are vital. Mine seized Sunday as I was working on a project and stayed frozen until Wednesday when I was able to get it to a tech person. Of course it started right up for them! The techies claimed it was a glitch in one of my programs, but it solidified the disdain I have for my dependence on technology!!! (And my belief that computers have personalities and that mine is a passive-aggressive jerk.)

And my computer isn’t giving me fit(ten)s.

I sure hope these days of bad luck are done,

But I guess it helps to count my blessings

And consider this week a lesson learned. . .

Originally published 27 Sept 2014 in The Observer.