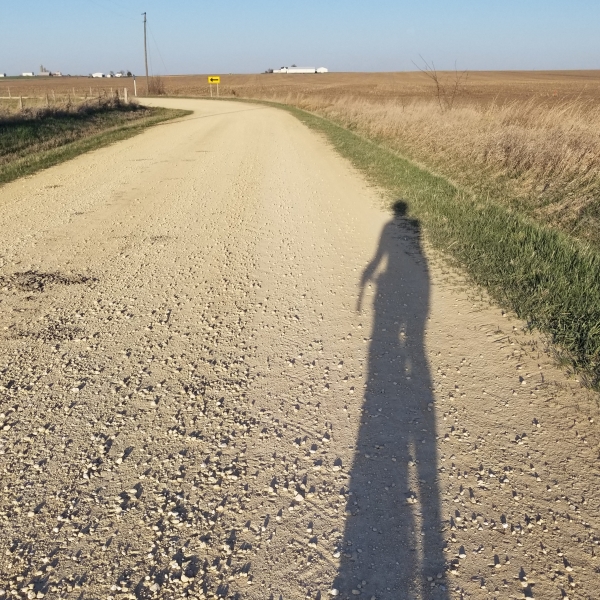 I’ve been waiting for this season. More specifically, this DAY. The day when I’m finally able to throw on the backpack and pedal off to work.

Because I choose to work so far from home, the monkey wrench in commuting by bike is always the amount of daylight left for the trek home. That and temperatures being warm enough so this delicate flower’s fingers and toes don’t freeze and snap off. Last Saturday that day came.

Having yet to remove my road bike from the trainer, I saddled up the gravel bike and headed off 15 minutes behind schedule at 6:30am along an unexplored gravel route. I had a vague idea of the roads I needed to take and was grateful for the north wind to blow me south to work.

As is my typical MO, I got a late start. Add that to my already-established sense of unease over lack of route planning and I was super nervous I’d end up late for work. Normally I love exploring new byways, but this particular morning I was distracted and just trying to lay down the hammer and make it to the shop in time for a shower.

Fortunately some map recon I’d done six weeks earlier came in handy and I remembered the necessary turns needed to pop out onto pavement in order to cross the Wapsi River at McCausland. And once I made it over the water, I had a firmer grasp of the terrain and made it to the shop into time to shower AND grab a coffee before the first customers showed up.

We had a great day at the shop and Healthy Habits is buzzing not just with long-awaited spring madness, but our much-anticipated move and May 11 grand opening at the new digs with Crawford Brewing. It’s going to be so flippin’ rad!

I first became an HH customer of Bruce’s back in 2000 when he had his smaller location near the old HyVee, when he was the only place that had a specific herbal supplement to help new, lactating moms. Then we saw, “Oh, you’re a bike shop, too?! HOLLA!!!!” Shortly thereafter he built his current location and a sweet set of Campy wheels for Marty. Now to witness the next level of Bruce’s vision come to fruition? I’m just psyched to know the guy. He’s put his heart and soul into this venture: half bike shop, half brewery. I’m only partly joking about digging my own “El Chappo tunnel” to Coffee Hound for my daily fix. You can keep the hops, it’s the coffee beans that I’m gonna miss!

Having had a tailwind blow me into work, I knew I’d be fighting a headwind going home, and except for sundown, I really had no time constraints. I had all my lights charged, but with my last miles on the paved highways of the Humeston and 136, I figured I’d be calling my husband to fetch me from riding those final three miles.

The weather was still gorgeous and though the wind had died somewhat, it remained stiff enough to keep me grateful for my health. Fortunately the journey home allowed me the time to take in the views and snap some pix.

The wind, however, did not prove to be the problem. I, Jenny, and my lack of woeful nutrition planning proved detrimental. I’d completely forgotten to plan. I shoved a protein bar in my mouth as I left on the morning ride, ate a protein puck later during work, lunch was cottage cheese and carrots with dill dip, then I ate another protein bar before leaving for home.

Though I had cash and credit on me, my route didn’t pass a convenience store by ONE SINGLE BLOCK (I took backroads through McCausland, not the main road). Because I hadn’t fueled properly all day, my thinking was cloudy and jumbled so I never thought to take the main road RIGHT PAST A GAS STATION. . .WHERE FOOD IS SOLD. . .THAT I COULD CONSUME. So of course, about five miles north of McCausland I got woozy as hell and found I had a single energy gel on me. (At least I had two full water bottles and the gel was a yummy marshmallow!)

But a single, 100 calorie energy gel would not correct a day’s worth of insufficient nutrition, eight hours of work and more than 50 arduous miles of gravel biking already logged. My brother’s place was only about five miles east, but do you think I’d ride over? Hell no? As with the gas station f’up, it didn’t occur to me to call Matt or bike to his house. My one-track mind was focused north on home.

Once I crossed the paved “Elviria Road” I was 10 miles from home, seven of which were gravel. I called my husband and told him where I was, warning him that I’d likely need picked up. By this point, my lone energy gel had long wore off, the middle toes on both feet were numb, my back was a cluster of tight knots and because my shoulders were cinching up tight around my ears, my neck was bound up and I couldn’t look over my left shoulder. Is this due to crappy, insufficient nutrition. I’d argue some of it, but I also know I need to get the magical insight of Dan to have my bike fit tweaked.

Marty easily found me at the top of a hill about seven miles from home. I feel kind of bummed for not making it the full 78 miles, but at the same time, I still got 70 and that’s a great day in the saddle!